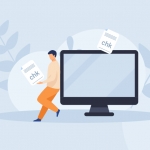 Reading Time: 6 minutesOften following an operating system crash or power failure, you may notice files with the file extension “.chk” pop up on some of your storage mediums. A lot of people write this off as random Windows files and never think much of it. In this article, you’re going to learn what causes these files to show up, what they are for in the first place, and how to recover CHK files.

What Is a CHK File?

Check Disk is one of Windows’ many system tools and is responsible for verifying the integrity of storage mediums and repairing certain file errors. Sometimes, when a file is being written to a specific storage medium, the writing process may be interrupted due to unforeseen circumstances, like a power outage, operating system crash, or the abrupt removal of a storage device, leading to only part of the file being written to the disk. 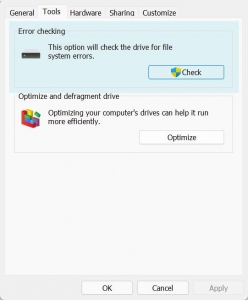 In cases like this, Windows often automatically deploys the Check Disk tool to attempt to fix the file system that was being written to. This process involves saving the chkdsk file fragments it comes across, placing them in a folder labeled “found.000”, and changing the file’s extension to “.chk”. You’ll find these files and folders on the root directory of the storage medium you were writing to.

How to Recover CHK Files

The problem with CHK files is that they don’t outright tell you the kind of file they were when they were being written. And if left as they are, these kinds of files are pretty much useless. Don’t lose hope just yet though, since there are a couple of tried and tested methods that can be used in recovering .chk files.

One involves figuring out the extension of the file on your own, while the other enlists the help of a third-party tool. We’re going to teach you how to do both. Bear in mind, however, that CHK files are considered corrupted and damaged, so it’s not uncommon that these files are too far gone to be recovered.

This method is considered more time-consuming and complicated than the alternative, but it can be accomplished without having to install a specific tool for the job. It relies on the fact that certain file types – when opened via Notepad or a hex editor – contain special characters near the beginning of the file that may serve as a hint towards what kind of file it originally was. Jpeg images, for example, contain the character string “JFIF”, while WinRAR archives show “Rar!”.

If you’d like to attempt this method, here’s what you’ll have to do:

Note: To make changing extensions easier, open any folder in Windows, navigate to the “View” tab along the top of the window, and make sure the “File name extensions” checkbox is ticked. This allows you to edit the CHK file extension by simply renaming the file.

FileCHK is perhaps the simplest and most straightforward CHK file recovery tool there is. To use this free solution, just follow these simple instructions.

You might want to create a backup of your CHK files before running this tool since it assigns extensions automatically once run. There are a lot of other tools that perform the same function as FileCHK, though some of them offer more recovery options. Some popular CHK files recovery solutions include UnCHK, CHK-Mate, and Chk-Back.

How to Recover Lost Files Without Using CHK Files

If you lost some of your files recently, there’s a chance that those files are still present on your storage medium. You might be able to recover them by bypassing Check Disk entirely and using a nifty data recovery solution like Disk Drill instead. To use Disk Drill, just follow the steps below:

How To Open CHK Files?
Technically, CHK files can be opened using Notepad or any hex editor, but all you’ll see is gibberish. If you want to open it in the way it was meant to before it became a chk file, you’ll have to figure out its file extension and then edit it so it launches using the right program.
Where is the Found.000 Folder Located on Windows 10?
Found.000 files usually show up automatically after Windows runs a Check Disk session and finds corrupted data. This data is stored as CHK files in the “Found.000” folder which generally appears in the root directory of the storage medium where the corrupted data was found.
How To Recover chk Files Using cmd?
It’s worth noting that this method requires you to already know the file extension that you want to change your CHK files to. Moreover, this method changes file extensions by batch, so it will indiscriminately change all CHK files to the same file extension.

How to Recover Deleted Temp Files on Windows 10