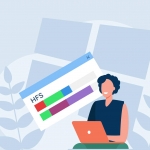 Reading Time: 4 minutesThe HFS and HFS+ file systems are usually associated with macOS. Naturally, to read and write to a HFS/HFS+ formatted drive, you’ll need a Mac device. To use HFS/HFS+ on Windows, you’ll need third-party file explorers. But what if you lost data from an HFS/HFS+ formatted drive, and don’t have access to a macOS computer? Well, HFS recovery is completely possible on Windows. Read on to find out how.

What Is HFS File System and How It Differs From HFS+

HFS stands for Hierarchical File System, and it’s a proprietary file system format developed by Apple for use on computers running macOS. The format is quite old, as it was released way back in 1985. It was introduced as a replacement to the Macintosh File System (MFS).

The primary reason behind development of the HFS file system, was that MFS was designed for use in small size media, such as floppy disks. HFS successfully fixed some of the performance issues that arose with the use of MFS in large media storage devices such as hard disk drives.

How to Use an HFS Partition on Windows

Windows cannot read or write to an HFS/HFS+ formatted storage device without the help of third-party software. Even then, functionality is quite limited. There are no free programs that will allow you to write data to an HFS/HFS+ drive on Windows.

A few programs that can read APFS and HFS+/HFS on Windows, include:

How to Recover Data From an HFS Drive

Disk Drill is one such program that supports data recovery from an HFS or HFS+ drive on Windows. You can also use the program to recover data from RAW partitions. It comes with an intuitive UI that is welcoming and a perfect fit for novice and expert users alike. The program also has a free trial of up to 500 MB data recovery, so you can test the program before any financial commitment. Let’s see how easy it is to recover data from Disk Drill:

How to Recover Data from a LaCie Hard Drive on Windows

Windows Detected a Hard Disk Problem: How to Fix It and Recover Data

How to Recover Data from Western Digital External Hard Drive