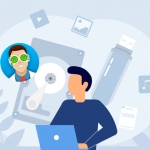 Reading Time: 5 minutesDisk Drill is a program that frequently appears on numerous lists of the best data recovery programs in the market. The program has a market leading data recovery success rate along with one of the most user-friendly GUIs so that no user feels uncomfortable navigating it. It also comes with a free trial that lets Windows users recover up to 500 MB of data for free.

In the sections below, we’ll explore what Disk Drill is, its data recovery efficacy in different data loss scenarios, and how certain factors influence the success rate and extent of data recovery.

To find out if Disk Drill really works, we conducted two test cases that are described in detail below. While each data recovery scenario is unique, we chose the cases below because they are some of the most common forms of data loss experienced by users.

In this test case, a user permanently deleted a file from the SSD using the Shift + Delete shortcut on Windows. The user didn’t waste any time and quickly disabled the TRIM feature by running the fsutil behavior set disabledeletenotify 1 command in Windows Command Prompt. Then he installed Disk Drill on another storage device and scanned the SSD.

Disk Drill discovered 825000 files with a collective size of 299 GB, during the scan. After clicking Review found items, the user discovered the required DOCX files in the Reconstructed section. The files had average data recovery chances according to Disk Drill. Among the three DOCX files, two had previews. The user selected the files using the checkboxes next to each of them, clicked Recover, and Disk Drill successfully recovered the files.

The data recovery scenario described above was successful because of Disk Drill’s effectiveness and the user being proactive about recovering their data. As the user downloaded Disk Drill on another drive, it didn’t overwrite the lost data on the SSD. Additionally, the user acted quickly and performed the data recovery before the TRIM command could be executed by the system.

In the second data recovery case, the user formatted the Kingston USB Drive to another file system. However, the user didn’t use the pen drive for a year after formatting it, at which point he realized that there were some important files on the pen drive before he had formatted it.

The data recovery attempt was successful in this case as well. The user connected the affected USB drive via a USB 3.0 port and scanned it using All recovery methods. The entire scan only took 3 minutes and 30 seconds. Disk Drill listed all the recoverable files that the user wanted, and they were easily able to select and recover the files.

Here, an important reason for successful data recovery, in addition to Disk Drill’s functionality, is the fact that the drive was unused after formatting. Additionally, the drive was formatted using Quick Format which doesn’t delete the data permanently, unless new data is written to the drive.

As evident in the section above, each data loss scenario is different and there are various other factors at play, in addition to the data recovery program you use. Let’s take a look at these factors, how they influence data recovery chances, and how you can increase the success rate:

Does Disk Drill Work for iPhone and Android?

The test cases above clearly demonstrate that Disk Drill is highly effective at recovering data on a PC. But, does Disk Drill work for iPhone and Android? Read the sections below to know how Disk Drill functions on an iPhone and an Android device.

However, Android versions 4.3 and above use the TRIM feature that has been mentioned in the sections above as well. Data on your Android device is not actually deleted when you give the command. The relevant data block is simply marked as available for use. The TRIM command cleans up this invalid data at regular intervals, typically when the device is idle. This is done for more efficient storage use and running of the storage drive. But, it also makes the cleaned up data difficult to recover.

Another caveat is that the TRIM command will most likely run when you root your Android device. However, you should still perform a data recovery scan, as some of the data may still be recoverable. If the lost files were on a micro SD card connected to your Android device, it’s best to disconnect it and then connect it to your PC using a card reader, and directly scan it using Disk Drill. This eliminates the need to root your phone.

It’s impossible for Disk Drill to directly scan an iPhone’s file system because of the iOS privacy settings. However, the software creates an invisible iTunes backup that contains your device’s apps and databases. It then analyzes the backup to find recoverable data and list it.

To recover data from an iPhone, you need to connect it to your macOS device and then scan it using Disk Drill.

Disk Drill supports a wide range of file types when it comes to iPhone data recovery. These include photos and videos, contacts and calendar events, voice memos and text notes, bookmarks, chats and text messages (SMS), as well as your call history.

The data recovery test cases clearly answer, “Does Disk Drill really work?” Yes, in our tests, the program was able to recover all the missing data in a short span of time. The program’s wide compatibility with Windows, macOS, Android, and iOS ensures that you don’t need to use other data recovery software for data loss on different platforms.

What is Disk Drill and Why You Need It