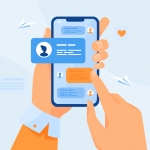 Reading Time: 9 minutesThere are currently 3.5 billion smartphone users worldwide, and they have between 60 and 90 apps installed on their devices. For mobile app developers or anyone else interested in creating an app, this translates into a $150 billion opportunity.

To take advantage of this opportunity, it’s no longer enough to simply make an app and publish it on a digital distribution platform such as Apple’s App Store or Google’s Play Store. These days, the competition for mobile users’ attention is so fierce that app developers have to carefully plan each and every step in order to stand out.

Regardless of if this is your first time embarking on an app development journey or if you have some experience with building mobile applications and want to learn something new, this article will teach you how to create a successful mobile app that users will keep coming back to over and over again. Not all app ideas are equally great and worth turning into functional apps. Before you start building your app, you need to verify that it doesn’t sound good only in your head. It’s always a good idea to start with a bit of background research to learn more about your audience. Here are some places where you can validate whether your target audience will be receptive to your app:

After a bit of research, you should be able to summarize your app idea with just one or two sentences:

A short description like this makes it clear what the main features of the app are, and you can either keep refining them on paper or, better yet, build a simple prototype to have a functional app as soon as possible. Before the first line of code is written, you should already have a good idea about what it will take to build your app from scratch in terms of time and money.

To accurately estimate how long it will take to develop an app, it helps to break down the development process into key stages:

In total, it typically takes less than a year for an idea to become an app that’s ready to be submitted to major app stores. But how much will it cost to create? To answer this question, let’s take a closer look at some of the most important factors that influence the cost of app development:

To get a rough estimate of how much it will cost to create your own app, you can use an online app cost calculator, and let it do all the number-crunching for you. Unless you’re planning to create either a very large or very simple app, you can expect to spend around $50,000 when outsourcing the development to a relatively affordable agency. A Minimum Viable Product, or MVP for short, is essentially the most barebones version of your app that you can distribute to early users in order to collect valuable feedback for future app development.

An excellent example of an MVP is this early version of Dropbox.com from 2009. As you can see, it contains only the Dropbox logo, a brief description, and a prominent download link. Today, the same page includes a sign-up form, dedicated sections for teams and individuals, and a lot more.

The point is that Dropbox launched as soon as they were ready to start helping users synchronize files across their devices, and the file hosting service has been evolving since then based on feedback collected from real users.

Let’s summarize the benefits of building an MVP:

Now that we’ve explained the importance of building an MVP, it’s time to choose the most suitable development approach. When you decide to build an app, you have three main development approaches to choose from:

Generally, simple apps whose main purpose is to display some kind of content (a restaurant menu, items available for order, or funny cat videos) can be web or hybrid. Apps whose goal is to offer complex features and deliver the best performance possible should almost always be native. Unless your plan is to offer your mobile app free of charge, you need to pick the right mobile app monetization strategy. There are five main strategies that you can choose from:

If your app is simpler and doesn’t offer anything truly groundbreaking (be honest with yourself), then you want to make it as easy as possible for users to install it, and the freemium model or in-app advertising let you do just that. If your app offers something so desirable that users would be willing to purchase it without trying it first, then the premium or subscription models are worth looking into.

When in doubt, you can always study how your competitors monetize their apps and implement a similar approach.

The Apple App Store has 2.2 million apps available for download, while the Google Play Store has 2.8 million. Considering these two numbers, you can’t reasonably expect your app to reach many users unless you actively marketing it. Depending on how successful your marketing effort will be, you might even make your app go viral and achieve multi-fold growth in a short amount of time.

It would be beyond the scope of this article to describe in detail how to make an app go viral, but we still want to share several helpful tips and marketing techniques that you can use to start your marketing campaign on the right foot.

With these five simple tips, you should be able to start attracting users and receiving your first downloads in no time. The app development process doesn’t end with your app getting published, or at least it shouldn’t. As long as you’re not okay with your app making a small splash and attracting a few downloads before fading into obscurity, you need to collect user feedback and extract valuable insights from it to provide ongoing support and improvements.

Even if you’ve hired a team of top-notch mobile app developers, you can be sure that your app will contain at least some bugs. That’s bad news because 88 percent of app users are willing to abandon apps based on bugs and glitches alone. Whenever you receive negative feedback from a user who has discovered an annoying bug, make it your priority to fix it.

However, fixing bugs isn’t enough to keep users coming back. Mobile users can choose from a seemingly endless stream of apps, so you need to work for their attention by making regular updates that improve existing functionality and introduce new features. If nothing else, make sure to support the latest version of your target platform so that your app can be installed by as many users as possible.

How to Recover Files Lost During Cut and Paste on PC